SAVE THE QUEEN ANNE HOUSES

Join the effort to #SaveFarmingtonsCharacter.

You’re at the Sundquist Pavilion on a Saturday morning, buying vegetables and flowers at the Farmington Farmers & Artisans Market.

Or you’re out on the Riley Park Ice Rink, skating with the kids under strings of twinkling lights—a real hometown experience, exactly what makes Farmington an appealing place to live, work, and spend your time.

You look across the street. Which view complements that image? This row of elegant, old-fashioned Queen Anne houses-turned businesses from the early 1900s…

…or a brand-new, multi-story residential complex, taking up almost half a city block, and perhaps a parking structure?

Farmington is a historic downtown. Elegant, old-fashioned buildings are integral to its character. Some of those buildings are businesses–for example, the Cook building, the Civic Theater, and the Korner Barbers.

At one point, residential homes (below, at right) lined the streets of the downtown as well.

Over the decades, many have been removed and replaced. A few, however, have stood the test of time.

One good example is a row of four Victorian homes-turned-businesses—all occupied—at Grand River and Grove Streets, across from the Sundquist Pavilion. 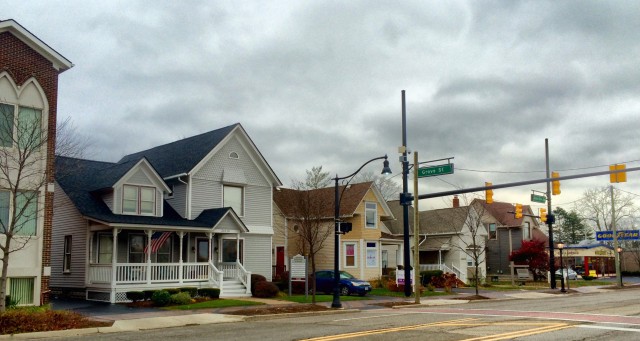 Although outside the historic district, they play an important role in setting the tone for Farmington’s historic downtown, central to our city’s civic persona.

So much so that in 2004, the DDA included these houses in their Downtown Master Plan (see page 28), noting that their reuse “is important to the City and these structures should be preserved to a certain degree because of their importance to the character and history of downtown.”

Here’s the problem: Not everyone in city government agrees they have value.

When bids went out for the adjacent redevelopment project at the Maxfield Training Center, the 1904 house at 33104 Grand River (plus the one behind it, on Thomas) went up for sale twice as part of a “package deal.” The vacant school property at Maxfield sold, but the houses didn’t.

What will the houses’ fate will be? A line in the city’s 2017 financial report gives us a clue. It reads: This land [the two houses] is intended to be resold to developers. See PDF page 9.

That has us worried. So does the updated Farmington Downtown Area Plan, adopted by city council in September 2015.

The plan’s concepts for that area threaten anywhere from one to all of the Queen Anne houses with removal or demolition as part of a redevelopment vision for the downtown. They would be replaced with apartments, retail space, and a parking structure—permanently and drastically altering the look and feel of the downtown area.

The Farmington Downtown Area Plan includes six project options for this section of downtown, referred to as Area A&B. It encompasses the Maxfield Training Center (a vacant school property behind the houses), the church parking lot to the west of the center, and the area extending from the front of the center to Grand River, on which stand the Queen Anne houses.

Concepts 1-4 involve replacing three or four of the four houses on Grand River with multi-story apartments, built up to Grand River, as well as adding townhouses, retail space, and potentially a parking structure. 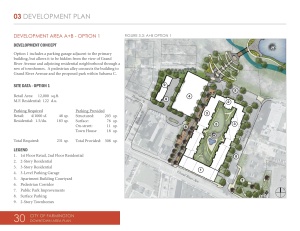 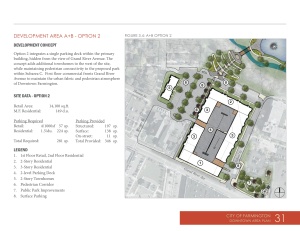 Concepts 5 and 6 involve building behind the houses on Grand River but removing one of them (33104 Grand River) to create a road or walkway, connecting the development to Grand River and Grove Street.

The residential complex, when built, could look something like one of these:

We checked with Tom Schultz, the city attorney, regarding how seriously the plan and its illustrations should be taken. He said in an emailed statement that the Farmington Downtown Area Plan is “intended to be a guide, or a set of goals, that the City itself wants to work toward…an idea of what could get approved as far as development/use, in the land development process.”

In other words, it’s what the city would like to see happen at that location.

We as Preservation Farmington think this would be a big mistake.

We believe that redevelopment that involves the removal of the Queen Anne houses, as put forth in the Downtown Area Plan, runs contrary to the image of Farmington that the city and the DDA are trying to portray to the Metro Detroit area. We’re concerned that the removal of the Queen Anne houses would negatively impact the look and feel of the downtown area. And we’re pretty certain that many Farmington area residents, and residents of surrounding communities who enjoy coming to downtown Farmington, don’t want these houses removed.

Someone wrote a letter to the editor in the Farmington Observer and joked, “Maybe the planners could put a parking deck/apartment facade in front of these homes from now until the end of the year. Any bets on public reaction?”

It’s a valid point, because the Queen Anne houses are prominently located. They’re the first thing you see as you approach the eastern entrance to the downtown, welcoming residents and visitors alike to spend time in our city.

Would a parking structure, or some apartments that look straight out of Royal Oak or Novi, truly set the tone for historic downtown Farmington? We don’t think so. We think it would take Farmington one step closer to becoming Suburbia, USA.

In response to these concerns, we launched a petition drive. Our goal was simple: asking that redevelopment be confined to the space behind the four Queen Anne houses on Grand River, preserving the historic character of the downtown’s eastern entrance.

The petition was launched on Thanksgiving Day 2015 and was open for anyone to sign, regardless of residency. Within three and a half weeks, it had been signed online and in print by 450 residents of Farmington and the surrounding area. On Monday, December 21, we formally presented our petition to Farmington City Council. (You can watch a video of the entire presentation here; we start at 33:16.)

In it, we called on decision makers at the City of Farmington to:

We also addressed another option that has been mentioned by city leadership and staff as a possible “compromise” solution: saving the houses by moving them out of  downtown Farmington.

Buying and selling property is up to the city council. And it’s up to us to hold those who represent us accountable for their actions.

Remember: The Downtown Area Plan still stands as the city’s official long-term vision for the area. And that means eventually taking the Grand River houses down.

For the latest developments, follow our Facebook page and subscribe to updates on this site (there’s a signup button at the bottom of the page). When Maxfield, the Grand River houses, and other issues of historic significance come up on the agenda, we will post notices of meetings, public hearings, and other opportunities to make your voice heard.