DOWN AND DIRTY: How 1970s Farmington got mired in the mud…and how “Operation Shovel” pulled them out

This is the first in a multi-part series about Farmington’s muddy roads in the 1970s.

We Michiganders love to complain about our roads. The potholes that tear up tires. The rim-bending, frame-smashing torture on the way to work. Highways that double as swimming pools for cars during a downpour. And the snow, right?

Not that it’s an idle complaint. In 2014, the Michigan Transportation Asset Management Council reported that a mere 17 percent of our state’s roads qualified as being in good shape.

But hey, at least most of them are paved.

Like most smallish suburban towns of its time, many of Farmington’s roads were paved with gravel and dirt. Some neighborhood roads were just dirt, with no gravel — and no storm drains. This held up fine, of course, when it was dry. Add heavy fall rains and an unseasonable thaw, though, and the roads turned into a miry mess.

Just how bad were they? Take Gill Road, 1973. It got so bad that teachers at Power Junior High School, located on Gill, petitioned to be bused through the muck to class.

Their petition doesn’t seem to have gained any traction. Here’s a photo in the Farmington Enterprise & Observer of music teacher Richard Cardeccia slopping through the mess with plastic bags over his legs in an attempt to keep his pants dry on the walk to school. 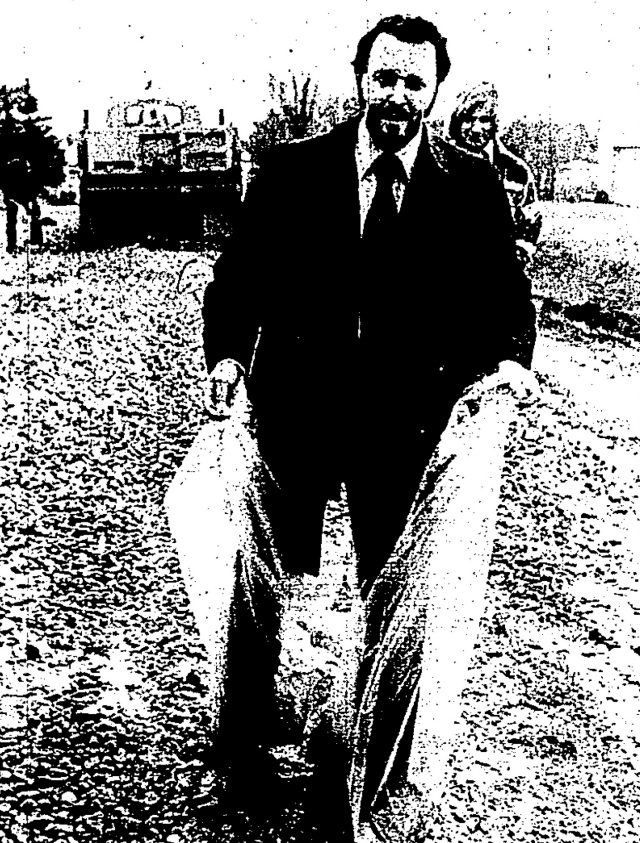 It’s up to your knees out there! Music teacher Richard Cardeccia tries to keep his pants clean under a couple plastic trash bags while he hikes through the muck to Power Junior High School on Gill Road.

In February 1973, both Power Junior High and Gill Elementary had to close for “mud days.”

An Oakland Country truck was sent out to lay down gravel on the ooze. When it got there, it sank to the axles. The crew had to climb down and dig it out with their shovels.

Ralph Evert, the news photographer sent out to cover the scene, happened to put his foot in a muck hole. He sank up to his knees.

Two kids fell in the mud at a construction site at 10 Mile and Orchard Lake, and it took two police officers to pull them out. 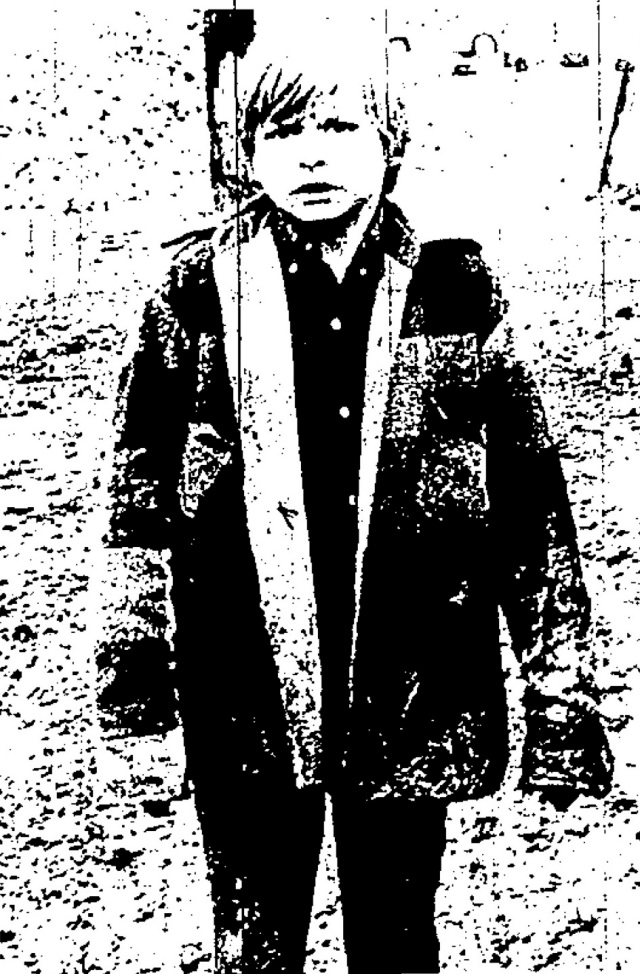 Little Daniel Sutton, after being pulled out of the mud at a construction site at 10 Mile and Orchard Lake. He and his friend Marty Rucher fell in, and it took two police officers to get them out.

It gets worse. At one point, a veteran in a wheelchair couldn’t get to his new job because of the mud.

And special arrangements had to be made for a woman who was 8½ months pregnant and living at the end of a muddy street — which meant that going to the doctor (or getting the doctor for a house call) would be a sticky situation at best.

Russell Hoffmeyer, owner of Grand River Boat Sales, donated a big six-wheeled off-road vehicle to the township police department to help them fight their way through the muddy, impassible roads of the so-called “Springbrook bog” between 10 Mile and Shiawassee. The Enterprise & Observer thought the machine looked like a bathtub, and remarked as much in a March 17 front-page story.

What’s this contraption? A six-wheeled, off-road grader, sent out by the Oakland County Road Commission to deal with the “Springbrook bog” between 10 Mile and Shiawassee.

Getting the county to fix the roads would have costed $1.75/foot, which didn’t go over to well with residents in the area. But something had to be done.

Tired of the muddy conditions that plagued them every spring, residents in the area bordered by downtown Farmington, Grand River, and 8 Mile decided the only way things were going to improve was if they dug some drainage ditches themselves.

On Parker Street, 22 residents pitched in $12 each to rent a ditch-digger for one week. Their story, as part of the ongoing mud fiasco, made front-page news several times.

It was Easter, so for most of the residents in Operation Shovel, holiday dinner doubled as a pit stop in a long week of digging.

Work went steadily, and their only problem was a gas main on the west side of the street, meaning the ditches nearby had to be dug by hand. That fell to the women, while the men handled the machinery. 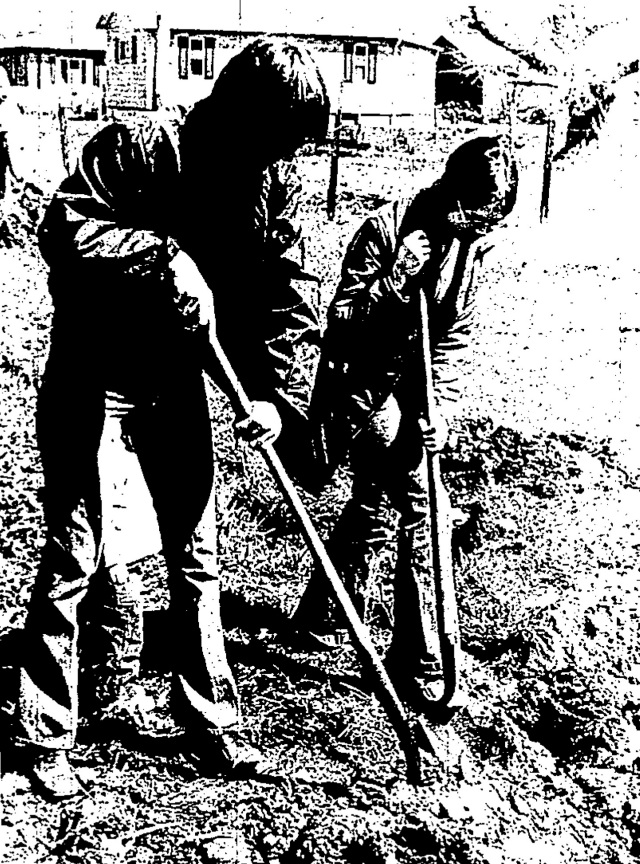 Did the people’s project work?

Maybe for them, at least in the short term. But it’s not the end the Farmington mud saga. Not by far.

Coming in Part 2: Does a mud barricade really keep out mud — or cars? One resident thinks it’s funny to take bets on whether cars will get un-stuck — but fears the worst if her 5-year-old daughter falls in. And some parents whose kids can’t get to school cry discrimination and threaten a class-action lawsuit.