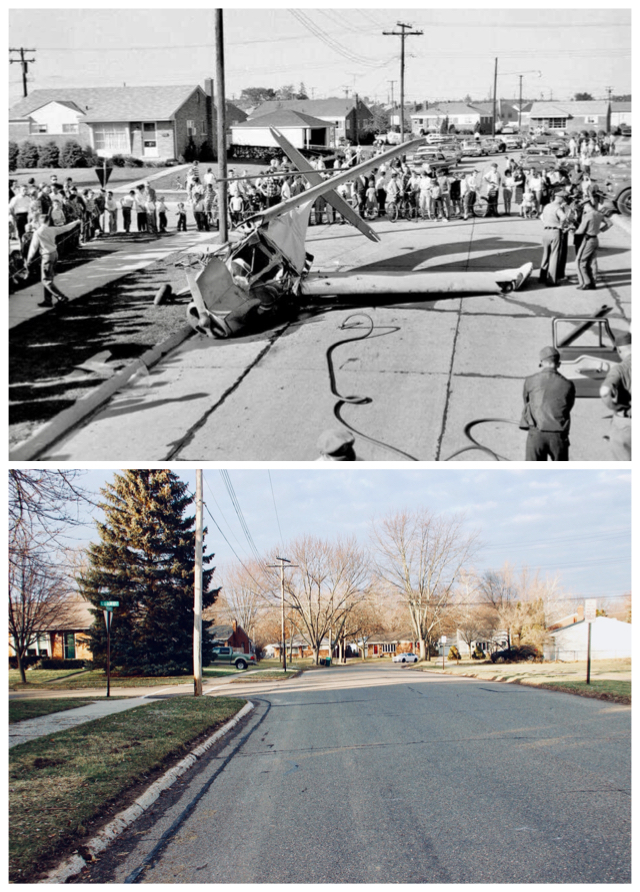 On October 9, 1960, a single-engine plane carrying three people crash-landed at Prospect and Loomis in the Bel-Aire subdivision, just west of Farmington High, where the St. Leo football team was playing Our Lady of Sorrows. It crashed in the Mathiesons’ front yard at 23680 Prospect, then skidded 100 feet. The right wing knocked a utility pole. The left wing hit 12-year-old Michael Wilson, who’d been riding his bike and had stopped to watch the plane circle. No one died, although all were injured.

Crazy story, right? Here’s the story on the front page of the Detroit Free Press on Monday, October 10, 1960: From the Farmington Observer: And a follow-up from the Observer on the fate of those involved:

VINTAGE POINT is Preservation Farmington’s photo column, featuring an exclusive focus on Farmington history: a look at our city through the lens of time. Look for Vintage Point every month in the Farmington Observer and Farmington Voice and on our Facebook and Twitter pages. We’ll also keep an archive of all past issues on our website under the Vintage Point tab.