It started last fall, when several of us on the Farmington Historical Commission resigned to speak out against new city plans that threatened our downtown’s historic character. Fans of Farmington history will likely recall our petition drive to save four of the city’s Queen Anne houses-turned-businesses, situated across Grand River from the Sundquist Pavilion.

When the city introduced a draft of its new Downtown Master Plan, we knew what it meant for the Queen Anne houses: removal, in the long term, in favor of a multi-story residential complex. In the short term, one house in particular was threatened to be turned into a street as part of an imminent redevelopment project, located directly adjacent. It wasn’t something we wanted to see. And we didn’t think people in Farmington wanted to see it, either. We wanted to get the word out and give dissenters a voice.

We launched a petition on Thanksgiving Day, and spent Black Friday collecting signatures and handing out pamphlets at the Gifts & Greens Market, under a freezing drizzle. (One of our co-founders caught pneumonia.) We wrote articles, did interviews, and spent more evenings looking at city documents and plans than we’d really care to remember.

Our goal was to raise awareness about the plight of these houses–and the underlying problem as Farmington’s historic character is slowly chipped away, building by building, house by house. 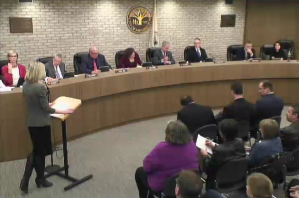 And the people of Farmington responded.

You showed up at city hall and spoke at public comment. You read and commented on our articles and our posts on social media. You wrote letters to the editor. You signed and circulated the petition. And by the time we presented it on December 21, we’d collected 450 signatures.

We’ve also been successful in bringing the preservation issue to the level of an agenda item in the city’s two-year goals. We’ve been holding our city leaders’ feet to the fire, calling for actions–not lip service–toward the historic preservation ethic required of accredited Main Street towns like ours.

Already, city council has authorized a preliminary drive-by survey of structures that might be worth checking into during a forthcoming historic buildings inventory. It’s a step in the direction of an ordinance that would truly protect the authenticity of the historic district, which forms such a key part of Farmington’s identity.

Lately, those of you who follow the Farmington history scene may have noticed that there hasn’t been much press about the Queen Anne houses. We haven’t forgotten them: we’re still keeping a close eye on the process. City council held a preliminary discussion on January 9, but the long and short of it is, not much is going on yet. A public hearing will be held before any final decision is made, giving community members a chance to provide input. When that time comes, rest assured that we’ll let everyone know.

In the meantime, we at Preservation Farmington have been working to increase awareness of local history through projects like our then-and-now photo column Vintage Point, which runs in the Farmington Observer and Farmington Voice. (We even found an old photo of the Grand River houses.) It’s stirring up interest in “what was there,” and we’ve had multiple people ask how to look for photos of their own historic houses or family businesses. If that’s you, contact Mary Yarger at the Farmington Community Library Heritage Room: myarger@mi.rr.com.

Now, to coincide with our six-month anniversary, Preservation Farmington is launching a membership program, giving history enthusiasts in the greater Farmington community the chance to participate on the local-history scene. As a member, you’ll receive a quarterly newsletter, get discounts for Preservation Farmington events, and be the first to know about what’s new in the realm of Farmington history.

Depending on what level of membership you choose, you can receive 5%, 10%, or 20% off our workshop series, plus free admission to our history talks.

Our first workshop, to be held Saturday, June 4, focuses on wood window repair. It will take place from 9 a.m. to 3 p.m. at 33928 Grand River in the Farmington Historic District. Attendees will have the opportunity to work on the actual, original windows to this house, under the guidance of specialist Jim Turner.

The class is $62, available by preregistration only, and will be run through Michigan Historic Preservation Network. It’s a great opportunity for old house owners and enthusiasts to learn skills for DIY historic home repair projects, which often show considerable long-term savings. Registration now available through Eventbrite by clicking here: Hands-On Window Rehabilitation Workshop.

Our 2016 program will continue with an energy efficiency workshop in August and a plaster repair workshop in November. Also coming this fall will be a four-part lecture series, with topics such as researching your historic home, architectural styles in Farmington and the Hills, and the history of Farmington’s interurban railway.

As you can see, we’re working to cover a range of history-related interests, reaching out to people from historic homeowners and diehard researchers to ordinary Farmington citizens who, flipping through the Sunday paper, might pause for a moment to take a second glance at a little picture showing how their hometown looked when other people, gone now, lived in our houses and walked the streets we know so well.

We’re reaching out to history people and non-history-people alike because in the end, all of us who love Farmington are working toward the same end goal. True, we often have different ways of approaching it. Some of us look through the lens of shared community heritage. Others don’t care so much about historic houses, instead focusing on brand-new housing and new configurations of Farmington’s urban landscape. Then we have gardeners, fitness enthusiasts, downtown business advocates, farmers market lovers…the list goes and on. And that’s the way it should be.

For us, the challenge is embracing this diversity of viewpoints through respectful, engaging dialogue, and showing how a robust historic district fits into the overall goal of a stronger, more vibrant community. It’s a challenge we look forward to as the preservation question plays out in months to come…in the council chambers, the newspapers, social media, and the hearts and minds of citizens in the small town we call home.